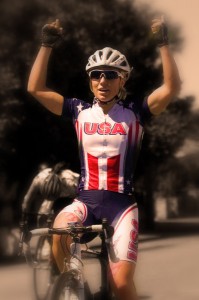 Evans won four stages and clinched her victory after winning a field sprint in the fifth stage from Palmerston North to Masterton just ahead of teammate Amber Neben. “It was a fantastic race.” said Evans “The people of New Zealand are as beautiful as the country. I didn’t anticipate winning my first UCI stage race but Team USA rode perfectly and set me up for the win. I was feeling really strong in the sprint and things just went my way.”

Evans, a 2012 Olympic hopeful and member of trade team Peanut Butter & Co. Twenty12, won the first two stages of the race which ended in tight field sprints. Her third win came in stage 5 and her fourth win came in the final race, stage 6.

Fatigue is a factor in any race and even more in a multi-day stage race. Helping Evans race and recover faster was a new product from sponsor Rocktape.

“Wearing Rocktape is no longer an option for me when it comes to racing,” said Evans. “I’ve been a big advocate of Rocktape for about a year now and really believe in what the Rocktape team is doing. I’ve been involved with this company from the beginning and have worked closely with Dr. Steven Capobianco on the Power Taping protocol and I feel they’ve got a real breakthough product.”

“Shelley is a world-class athlete and it’s a great pleasure to see her win such an important event,” said Dr. Capobianco. “Athletes at this level are very good at pushing through pain, but at some point even a world-class athlete needs help. Our protocol is designed to help reduce fatigue by stimulating the proprioceptive sensors on the skin, thereby increasing economy and efficiency.”

“I apply Rocktape to certain functional muscles that I use extensively in a race” said Evans.  “I won’t race without it now.”

“Our motto is: tape movement, not muscles.” said Greg van den Dries, CEO of Rocktape. “We’re a big believer in a very simple concept. There are sport specific muscles and fascial chains that run through the body. If you want to optimize performance, focus on the chain rather than the individual muscles, and you’ll have improvements that are explosive and significant.”