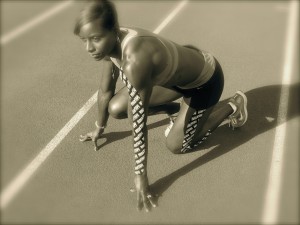 “All of us at Rocktape are very excited to add Damu Cherry to our list of Rockstars, and are especially pleased to support Damu as she makes her run for the 2012 Olympics,” said Greg van den Dries, president of Rocktape. “We have a special passion to support American women aspiring to make their Olympic teams. In addition to Damu, we are also a proud sponsor of Shelley Evans as she strives to make the US Olympic cycling team.”

Cherry competes in the 100 meter hurdles and is currently ranked #2 in the United States and #7 in the world by Track and Field News.

“Running is a tough sport, and I sometimes suffer from achilles tendonitis. I’ve tried other types of kinesiology tape, but find that Rocktape wears longer and actually seems to help more with my pain,” said Cherry. “I have lots of competitions this year, and with Olympic tryouts in my future, I want to do everything I can to stay strong and healthy. Rocktape is helping me with that goal.”

Damu Cherry currently resides and trains in Winter Garden, Florida, and is coached by Dennis Mitchell.