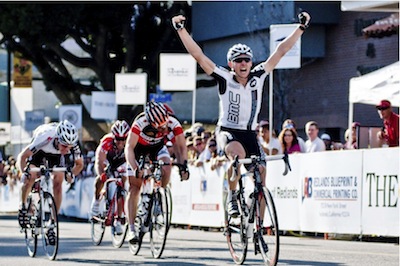 January 28 2010, Los Gatos CA – Rocktape, the leader in high performance athletic tape and accessories for active people everywhere, today announced a multi-year partnership agreement with professional road racing cyclist, previous member of the US World Team and winner of the KOM jersey in the 2008 Tour of California, Jackson Stewart.

As part of the company’s mission to deliver high-quality products that meet the needs of all athletes, Stewart will collaborate with Rocktape’s research and development team to design select merchandise to better serve the cycling market. Stewart will also be actively engaging with Rocktape’s online community, appearing in upcoming marketing and sales campaigns, and promoting the brand through events and training videos.

A highly decorated and diverse athlete, Stewart’s recent appearance in the 2009 Paris-Roubaix, 2008 Tour of California and multiple wins including a stage win at the Redlands classic make him uniquely qualified to provide feedback to the R&D team at Rocktape.

“Jackson is an exceptional competitor and reflects the caliber of athlete we look for to set the bar even higher for our brand,” said Rocktape CEO, Greg van den Dries. “We’re excited to have him join our team to help further develop our product line, promote our message to both the serious and the recreational cyclist, and support our overall evolution as a company.”

“I’ve been a big advocate of this type of tape for some time.” said Jackson Stewart. “What intrigues me is the PowerTaping method; I’ve always used tape to help with the typical aches and pains I get from competition, but being able to preemptively tape to reduce fatigue is a very interesting area that no one is exploring. In my world, the difference between podium and 50th is often determined by seconds. Any product that that can prevent fatigue and help me recover quicker should be on everyone’s radar and I’m very excited to be involved with the Rocktape team.”

As a member of the BMC Racing team which includes George Hincapie and World Champion Cadel Evans, Stewart is looking forward to an outstanding season which will start with several of the Spring Semi Classic and Classics.

ROCKTAPE is headquartered in Los Gatos, California. ROCKTAPE can be purchased at leading running and cycling shops, Road Runner Sports and Sports Basement locations and online at www.rocktape.com. ROCKTAPE comes in Twelve different styles and colors, and retails for $20 per roll. Team discounts are available. Contact admin@rocktape.com for more info.